China's Not Having Our Trash
By: Taeyong Woo 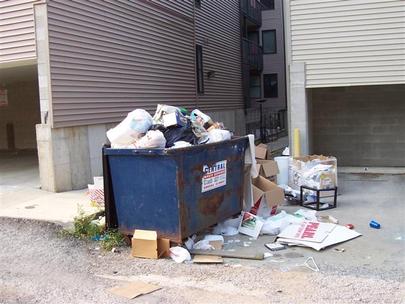 By Jcarlyle at en.wikipedia [Public domain], from Wikimedia Commons
Since 2007 the U.S. has been exporting trash such as metal, paper, plastic and crumpled soda cans to China. It was one of America's top exports to China. In 2011, the U.S. sold $10.8 billion worth of metal and paper scrap to China.  There is a reason for this trade. The U.S. had been importing a large amount of goods in shipping containers, but the shipping containers that carried those goods were being sent back to China empty. So, it made sense to send the return-trip containers filled with recycled cardboard boxes, waste paper, and other scrap. China wanted to import our high quality cardboard to mix in with their low quality fibers and make better packaging. Since China does not have forest resources, most of their packaging was previously made from recycled fibers, which were quite flimsy. Therefore, the exporting of our recyclables began as a win-win trade.

The U.S. collected 52.8 million tons of recycling and about 15.8 million tons of tons were sent to China. China imports nearly half of America's recycled plastics, including bottles and containers of all sorts, amounting to about $500 million worth. However, beginning in February of 2013, China launched "Operation Green Fence", a policy to prohibit the imports of unwashed post-consumer plastics and other contaminated waste shipments. This will lead to a serious crackdown of U.S. trash imports.

So what comes next? Brad Plumer says that there are 5 possibilities:

1) This is all overblown and the Green Fence won't last. Maybe Chinese manufacturers, who really do need the plastic resin and other raw materials, will pressure the government to relax its restrictions on trash after a few months. We'll see.

2) Other countries will take our recycling instead. A recent Recycling Today article raised the possibility that a great deal of America's plastic and paper waste will simply get shipped elsewhere, to countries such as India. Still, it's not clear that anyone can replace China, whose demand for America's trash has been enormous.

3) The United States will simply have to recycle more of its trash at home. This is harder than it sounds. Guilford noted that North America hasn't built a new recycling plant since 2003 — that's how reliant we've become on China. Could that change? Perhaps. Luke Vernon of Eco-Products, a food-service company in Boulder, has some ideas along those lines: "What’s needed is an end-market for recycled materials. Essentially, more manufacturers need to demand recycled plastics to use in their products. That means that the economics need to be in favor of choosing a recycled plastic vs. a virgin plastic."

4) U.S. cities will figure out how to produce less contaminated waste. Valerie Androutsopoulos of the recycling firm Vangel argues that the United States produces so much contaminated waste because of our reliance on "single-stream recycling," in which all types of recycling are jumbled together in one collection truck. "If the materials we are exporting are so contaminated that they are being rejected by those we sell to," she notes, "maybe it’s time to take another look at dual stream recycling." This would require everyone to keep paper waste separate from glass, plastic and metal. There are also all sorts of technologies that allow even single-stream recycling programs to sort their waste more carefully, reducing contamination, including improved screening and optical sorting. But these options could make recycling more expensive.

5) U.S. cities will simply recycle less.  That's the last possibility. If there's no market for recyclable materials, or if recycling becomes too expensive, many of that trash could just end up in landfills.

This is a reminder of that America's recycling habits are highly dependent on trade and markets, particularly in China.