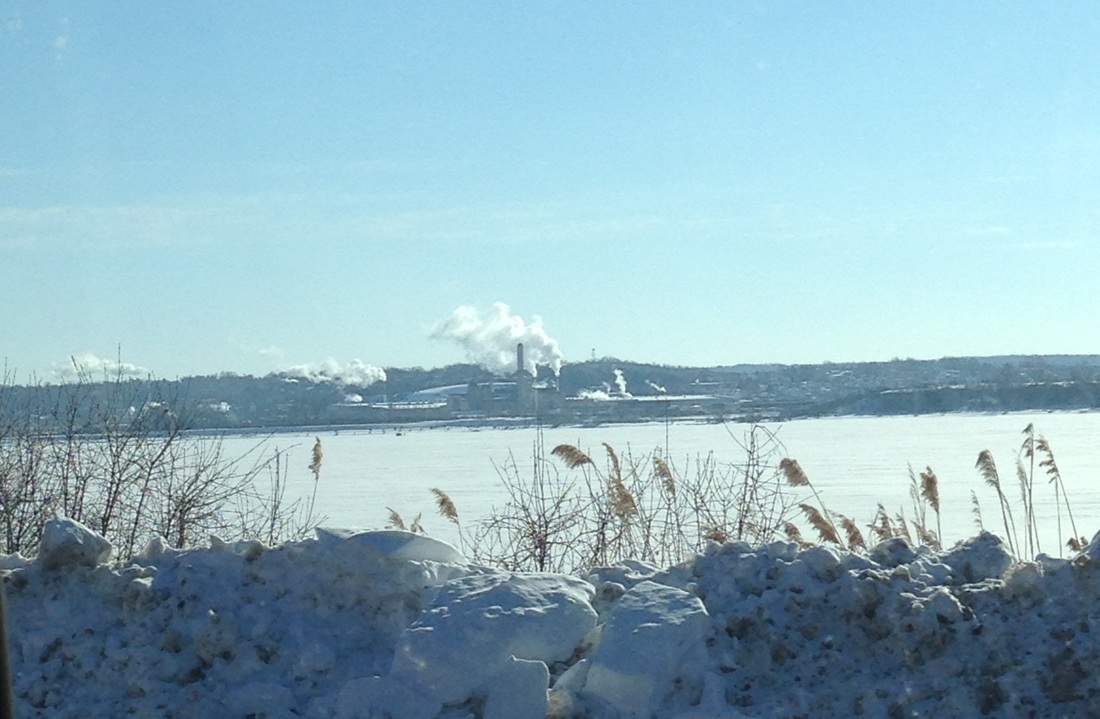 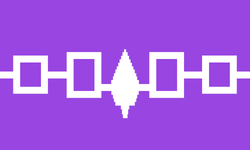 The flag of the Iroquois confederacy.
Long ago, on the glittering blue shores of Lake Onondaga, the Peacemaker arrived in a stone canoe. Sent by the Creator, he brought a message of peace and democracy to the five nations that had been warring for decades. Once his message had reached all of the Seneca, Cayuga, Onondaga, Oneida, and Mohawk peoples, the 49 leaders of the nations met again at the lake. A great white pine tree was dug up, and all of their weapons were thrown into the hole. The Tree of Peace was then replanted, and an eagle was placed on top to remind the people to uphold the message of peace.

Unfortunately, the peace of that pristine landscape has been broken. Where the once great Tree of Peace’s roots stretched out into the clay of the lakeshore, now they are choked with pollution and debris. It was said that any person seeking peace and democracy could take refuge under the tree, but the shade is not as bountiful as it once was. What happened to the environment around Onondaga Lake to disturb this peace?

Onondaga Lake is now one of the most, if not the most polluted lake in America. We, with of industrial pollution, tourism, and sewage waste, have tarnished a great symbol of the principles which our country was supposedly founded on--democracy.

We single-handedly destroyed one of the most notable figures of Iroquois spirituality. In Native American culture, spirituality and religion are rooted in place. A connection is instilled between a human being and an aspect of nature, whether that be a specific mountain, plateau, water body, or the like. Indigenous people will not simply leave their homes in order to create a life in a new location, similar to how Europeans left their churches behind to build new churches. The land is the church; therefore, the annihilation of Onondaga Lake is comparable to the burning of a cross in Catholicism, except crosses can be replaced.

The downfall of Onondaga Lake began after the building of the Erie Canal, when the salt industry of the 1700s was beginning to prosper. In the 1800s, Onondaga Lake was a popular tourist attraction, with beaches, resorts and amusement parks. In the late 1880s, the Solvay company, which drilled for salt, began dumping most of their waste directly into the lake.  David Chanatry, says the lake was hit with a one-two punch: raw and partially treated sewage from Syracuse and its suburbs, and a hundred years’ worth of industrial dumping. Swimming was banned by 1940, followed by a fishing ban in 1970. Onondaga Lake was then one of the most polluted lakes in the U.S., and became a Superfund priority in 1994. Finally, in 2012, a partial cleanup of contaminants on the lake bottom was launched by Honeywell, and the dredging did not stop until late 2014.

There are actually three main sources of pollution for Onondaga Lake: industrial pollution, wastewater pollution, and polluted runoff. In the 1880s and continuing through for over 100 years, a number of industrial companies discharged waste such as mercury, ammonia, and PCBs, which contributed to the contamination of the water and sediment. Groundwater was also contaminated which reduced wildlife habitat and increased levels of toxic compounds in aquatic organisms, which led to Onondaga Lake becoming a Superfund site in 1994. Through wastewater pollution, ammonia and phosphorus in sewage from Onondaga County’s Metro impacted fish migration and reproduction along with leading to algal blooms and decreased oxygen levels. Also, storm water runoff can enter the sewage system and make untreated sewage and storm water go into the lake’s tributaries. Finally, stormwater runoff carries pollutants such as animal waste and salt from highway ice removal not only to the lake’s tributaries but also to the lake itself. As you can see, things look pretty bad for Onondaga Lake, and to make things worse, David Chanatry even said that 20 pounds of mercury were once dumped into it. However, once Onondaga Lake was labeled as a Superfund site, steps were taken to start cleaning it up.

What started the cleanup of Onondaga Lake was when the US Attorney General sued Allied Chemical Corps., one of the companies that caused the industrial pollution, to stop mercury dumping. This led to a cascade of events to help restore the lake throughout the years. One of the most interesting developments to help restore the lake is that Onondaga officials, along with many stakeholder community groups, have taken a proactive approach to develop green infrastructure that is designed to reduce the amount of storm runoff going to sewers and contributing to combined sewer overflow or CSO. One such project, Save the Rain, is the addition of a green roof on the Magnerelli Community Center which will capture about 183,000 gallons of storm water each year. Honeywell International Inc. (the successor of Allied Chemical Corps.) is remediating polluted sites upland of the lake for which they were the cause of. Onondaga County also has a litter vacuum truck that removes floating trash from the water, which helps reduce non-point source pollution. There are many restoration projects in action today to help clean-up Onondaga Lake, and already phosphorus discharges from the lake have been reduced by 83% from 1993 to 2009. Water quality has also improved greatly over the years. Onondaga Lake may one day be a healthy lake again.

Most of the frustration that the Onondaga Nation feel with Honeywell, is their plan to only partially restore the lake. Though Honeywell’s $4.51 million dredging project aimed to remove harmful debris and sediments on the lake bottom, they are still leaving a lot behind. A complete restoration of the lake would cost around $2.16 billion. In contrast, Honeywell is reported to have made around $10.3 billion dollars in the second quarter of 2014. Joseph Heath, of the Haudenosaunee General Counsel said, “To remove all of the mercury and contaminates from Onondaga Lake, it would have required dredging about 20 million cubic yards of sediment. We are leaving over 17 million tons of pollution in the lake for our children to deal with”. The Onondaga nation’s cry to remove all contaminants from the lake has largely been ignored. Because of their dissatisfaction with Honeywell, they were not even invited to the celebration ceremony when the dredging was “finished”.

The Onondaga Nation not only calls for this more expensive but better clean-up plan, but also filed a land rights action in 2011. They petitioned the federal court to declare that New York violated federal law when they took Onondaga Land. Unfortunately, the federal court dismissed their petition, along with the Second Circuit Court of Appeals and the Supreme Court.
The Haudenosaunee have a sustainability principle that looks into the seventh generation of its people. The words Peacemaker’s passed down were, “Make your decisions on behalf of the seventh generation coming. Those faces looking up from the earth, layer upon layer waiting their time.” He said, “Defend them, protect them, they’re helpless, they’re in your hands. That’s your duty, your responsibility.” In seven generations, which is about 140 years, what will this lake look like to our descendants? Will it be the sparkling, pristine watershed that the Peacemaker arrived on to greet us so long ago? Will it be lush with native cattails, white geranium flowers, spear thistles, and white water lilies? Are restoration efforts extending to this future, or extending only to the end of our own generation?

We are incredibly proud to attend college at SUNY ESF, however, we are not proud to attend college in a city containing the most polluted lake in the country. We would be proud to be a part of restoring Onondaga Lake back to its former glory, and we would be honored to show our respects to Native people in doing so. The Onondaga Nation has a vision for Onondaga Lake: for the lake’s water to be drinkable, swimmable, and fishable, and for the soil to be clean and fertile to once again grow food and medicinal plants. It is this vision we wish to preserve. The people, the Earth, the waters, fish, plants, animals, and trees, the Four Winds, the Thunderers, the Sun, Grandmother Moon, the Stars, the Enlightened Teachers, and the Creator deserve health and harmony to be restored to the lake.


Do you have any thoughts on the state of Onondaga Lake, and how it relates to you? Take the Seventh Generation’s quick survey to make your voice heard. And be sure to check out  their blog for updates and further readings.