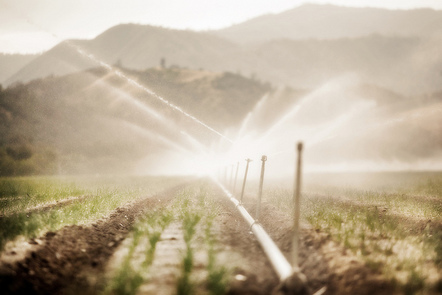 Recycling the blue, to stay Green
by  Richard Monaco

Reusing water is becoming more and more prevalent in America today. Water reuse is not a complicated system in all cases. For example, in industrial situations there are companies that reuse water for cooling purposes. This is a simple example of a situation where, through reuse of water, overall daily water consumption is greatly reduced. Additionally, reusing water to cool machinery prevents putting hot water back into the ecosystem, a source of thermal pollution. One form of water reuse that is becoming increasingly popular is gray water reuse. Gray water is defined as reusable wastewater that comes from residential, industrial, and other such uses that render the water unclean. (need citation) This water is used for mainly irrigation. Similarly there can be unplanned gray water reuse. For example, a sewage treatment plant pumps treated water out into a stream. If a municipality takes water from this source downstream of where the treatment plant pumps out water, naturally the treated water will mix with the water that is already there. In this way there is unplanned reuse of gray water. This is not a bad thing though; at least it shouldn’t be. If we are treating the sewage as well as we say we are, and as well as we should be, then it should be safe to drink. However most people don’t like the idea of drinking water that they defecate, or bathe in.

It is likely that people will initially be abrasive to the idea of reusing water. It is therefore an idea that needs to be slowly integrated. The first step is public awareness. We need to start by educating the public about reclaimed water. What it is, and why it’s safe for human use. One of the main points I would want to outline in such an education effort is that if you don’t think water is safe for you, why put it into ecosystems. The Golden Rule is a  simple concept that many people claim to live by, and is something that can be applied to this situation. If you wouldn’t want dirty water, then don’t put it into the environment. What I’m getting at is that we normally clean our water very well, but if people have reason to believe that the water isn’t getting cleaned as well as it should be, they should be encouraged to stand up and say something.

One thing that needs to be kept in mind is that not all areas need to reuse their water. If you live in an area that gets plenty of rain, chances are that surface water or aquifers (whichever is being used) are getting enough of a recharge that it’s okay to not reuse water. But if you live in an area with high water usage, such as Long Island which is known for people taking extreme good care their lawns, or a drought area, such as the entire state of California, water reuse is a much needed option. On Long Island where the entire island uses aquifers, citizens are known for using copious amounts of water on their lawns. (redundant) A lot of water is being pumped out daily to satisfy both human and lawn needs. If something as simple as a separate pipe system was installed to bring water back out to residential communities for lawn irrigation, this would relieve built up pressure on the aquifers and give them more time to recharge, in order to prevent entire days over which they are completely drained.

Being an agricultural state, California naturally uses more water than the average state might use. But being in a drought for a while now, the state has been lacking in its water supplies. However that’s not going to stop the agricultural business. The food companies continue to grow large amounts of crops and use up large amounts of water when the entire state is in need of it. This is an obvious situation where water reuses is needed. You can use reused water to irrigate crops. I will even venture to say that in the situation California is in, they need to immediately start reusing water.

Water reuse IS the way of the future. We must start now before it’s too late with places with high water use like Long Island and California.