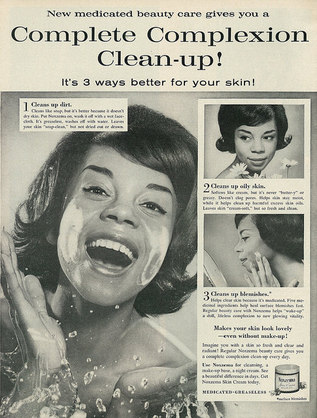 Microbeads; Not a Micro Problem
by Rachel Rubach

Microbeads in face washes have no purpose at all. They appear to be a better exfoliant but the truth is, these beads aren’t doing anything special. Most companies just use these beads as a way to make their products look appealing to the younger generation. What they are basically doing is just having floating colorful beads, in a clear liquid, with a fruity scent to make their product look cool. Each tube of product can contain over 300,000 beads and are almost always smaller than one millimeter. These microbeads are made out of polyethylene and polypropylene, plastics which don’t dissolve in water.  An alternative that is reasonable is to use products that are organic such as apricot seeds or walnut husks as a natural exfoliant which actually work better than the plastic beads. The companies don’t want to do this though because they are afraid if they use exfoliants that work too well then the sales of the face wash would decrease because the consumer would wash their face less. The companies also don’t want to change their ingredients or formula because it takes two to three years to perfect the new formula and get it passed by the FDA.

The microbeads, not being able to dissolve in water, end up in the Great Lakes. This is because the beads are so small that they don’t get filtered correctly. The water treatment plants are not designed for the small particles. Many sewage treatment facilities do not capture synthetic particle the size of the microbeads, and during rainy days some facilities let sewage overflow go right into the waterways. Microplastics break down into smaller pieces and do not biodegrade. The plastic degrades into the small pieces from the UV radiation and as a result of the abrasive waves. These pieces are accumulating extremely rapidly. "We found more plastics in Lake Erie than any of the oceanic sampling that we've done in the last four years totaling some 50,000 miles," says Anna Cummins. Lake Erie has 100,000-650,000 plastic pieces per square mile, the most of all the Great lakes which are twenty percent of the world’s fresh water supply.

The microbeads also attract and absorb persistent organic pollutants (POPs) such as PCBs and DDT from the oceans. Researchers have found polyethylene and polypropylene that included traces of aluminum silicate and coal ash, often coming from the power plants. These chemicals are absorbed and released into the animals that ingest them. Fish eat the microbeads because they are unable to distinguish between food and microplastics and therefore accidently feed on the microplastics. Over 663 different species were negatively impacted by marine debris with approximately eleven percent of reported cases specifically related to the ingestion of microplastics. Some species of fish excrete the plastics easily, which then return the lake, but others do not and the plastic builds up internally. The fish not able to excrete the plastic, absorb the chemicals and pass on the chemicals throughout the food chain. The beads are also ingested and retained by filter feeders such as muscles. On average, each gram of muscle flesh contains one particle of plastic. Species of plankton are also found to ingest and retain plastic particles. All leading to them being ingested by humans.

Banning the face washes that have these microbeads would be the best option to prevent the plastic from entering the Great Lakes. In nearly every Great Lakes shoreline state, lawmakers are considering banning the manufacture and sales of products with microbeads. Illinois was the first to do so earlier this year. New York needs to advance with the other states and realize that this has to be done and plastic microbeads need to be banned, especially because Lake Erie has the highest amounts of plastic per square kilometer. Luckily, some companies aren’t waiting for laws to stop them from producing these plastics. Several companies including Proctor & Gamble, Johnson & Johnson, The Body Shop and L’Oreal have voluntarily stopped the use of these microbeads in their products.