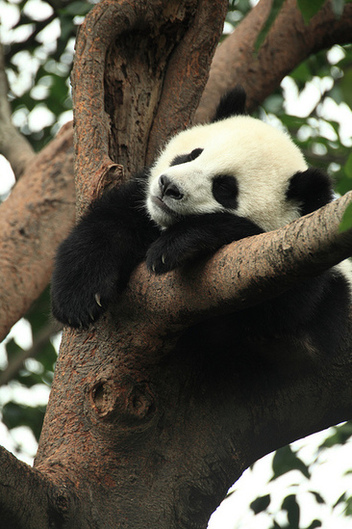 Giant Pandas are in Giant Trouble
by Jennifer McElwain

How can one of the most beloved animals on the planet be one of the most hurt animals on the planet? If you were able to speak giant panda, I don’t think they would even be able to answer why. There’s only  approximately 1000 to 2000 giant pandas still living in the wild which pushes different conservation efforts and programs towards helping them. They are in place to help restore panda population to their native habitat in southwest China. The population of giant pandas is at an all-time low.

At the current date, Giant Pandas are classified on IUCN’s Red List as endangered species. A very large reason that Giant pandas are endangered is because of habitat destruction. China’s population is continuously growing and as it grows very rapidly, the giant panda’s habitat has been getting taken over by new development. This pushes the Giant Pandas into smaller and less livable places to what they were used to and less access to food. Giant Pandas primarily rely on a few types of bamboo at different times of the year for a main food source. When even one type of bamboo is destroyed by over development, it can leave the pandas at risk of starvation.

Giant pandas have lived in bamboo forests for several million years. Being that giant pandas have been here for millions of years, it would be very difficult for them to change their eating habits. The giant pandas usual day is full of eating and relieving itself. A typical giant panda eats half the day so approximately 12 hours a day. It takes about 28 pounds of bamboo to satisfy the diet of a panda for all of the necessary nutrients. Although the Giant pandas receive most of their water through eating bamboo, they still need regular access to water through streams and lakes. The people of China are attracted to finding land that has access to water also. This being true, makes the Pandas have less access to water because the people of China took over that land. The Pandas of China (which is the majority of where the Panda population lives) are lacking in food resources and water access making it very difficult to live.

Pandas are well known to reproduce so infrequently so it makes it more difficult to restore the population from such a low point. A cub of a panda is very helpless and it takes a lot of effort from the mother to raise it. This being true, if the mother doesn’t help it at every moment, the cub can be at danger. The cubs can’t open their eyes until they are six to eight weeks old and they are also not mobile until three months. The little cubs are born very helpless and it is hard to have the mother panda bear stay at its side the entire time. The mortality rate of young giant pandas are very high for this reason. Having giant pandas be at risk of extinction does not help that their reproduction rate is very low.

The giant pandas not only need to be taken care of, they need their habitat to be restored and saved. A main source of help that giant pandas receive is donations that go to multiple things. Mainly donations go to nature reserve protection, community development, and research and monitoring work. The nature reserve protection is when the reserve borders is patrolled so there is no illegal hunting or logging taking place. The community development help is to get wood for the local people so they don’t have to impact the forest by their wood-fuel harvesting. There also has to be monitoring and research of pandas in certain places in China such as Minshan and Qinling Mountains. They use this monitoring through infrared cameras and scientists can figure things out about the pandas that can potentially help the giant pandas. Since Giant Pandas are such a loved animal around the world, it helps that they need money to help raise them back up.